An Open Letter to Paul Pierce 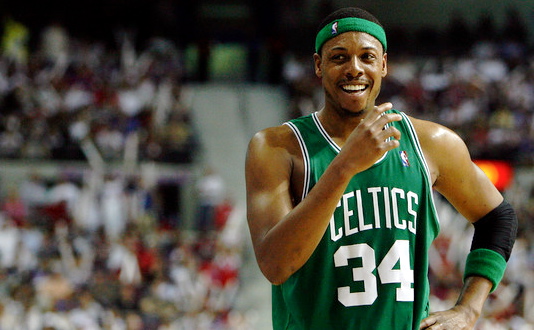 LOS ANGELES — Paul Pierce has been my favorite NBA player since he entered the league as the 10th pick of the 1998 Draft. Through thick and thin, some losing and a LOT of winning, he personified what Boston Celtics basketball was for the last 15 seasons. He was the Captain and The Truth.His draft-night trade, along with Kevin Garnett and others, to New Jersey was made official Friday, which ended his fantastic and Hall of Fame run at the Garden. Such, I felt compelled to reach out and express my love, gratitude and respect for what he meant to me as a gigantic fan.

From the bottom of my heart, thank you. Thank you for being a true Celtic. Thank you for not giving up on the city and fans when it would have been easy to, especially in the early years. Thank you for always caring. Thank you for always playing hard. Thank you for every pull-up 3 on the fast break, every step back elbow jumper, every spin move in the lane and every fist pump to get the Garden crowd going. Thank you for being the Captain and The Truth and living up to what both of those words actually meant. It was an honor and a privilege to watch you play night-in and night-out, through the grinds of the losing seasons and the supreme joys of the winning ones. Thank you for letting Antoine wiggle and Walter dive on the floor and Scal drop 3s and Rondo drop dimes and Kevin drop 12-letter bombs. Thank you for making it fun to be a Celtics fan again. For making the Garden the place to be in Boston. Thank you for Banner 17 and in your post-Game 6 presser in 2008 for thanking your teammates first. Thank you for making it look so easy and difficult at the same time. Quick anecdote: after the championship, I had to get your jersey (don’t ask why I didn’t have one before, I mean, I’m a grown ass man, we shouldn’t wear jerseys). I just had to. I wanted to wear it around in celebration.

That summer, I went to Atlantic City with my buddies, like we do every year, for our fantasy football draft and one night I wore it out. Wore it to dinner at our traditional Friday spot, Hooters in the Tropicana, and karaoke at Desert Rose, and high-fived every person who said something to me about it because I was proud. The glory had been restored and it meant a lot to rep you. That jersey is still proudly displayed today in my house. Now, I’m a Celtics fan out here in Los Angeles, your hometown, and it’s been difficult at times dealing with the lunacy of fans of that team from here. But we stay strong. And I’ll always stay strong. You’re my guy and it’s been a great ride these last 15 years. You’ll always be the Captain and The Truth and I know you’ll always bleed green. And I’ll be rooting for you next season in 78 games. I hope I’m in the house when you return to Boston for the first time. It’s bound to be a magical moment, and likewise I look forward to the day when “34” is raised to the rafters, where it belongs. Gone but never forgotten, you’re one of a kind.