LOS ANGELES — Last week in the NFL was one everyone would like to forget. Unless, of course, you’re one of the handful of teams who improved to 2-0 and thus greatly increased your chance of eventually advancing to the playoffs. If you’re winless as we enter Week 3, then what a pity because in the last five seasons just one team – the 2013 Panthers – has advanced to the tournament after beginning the year as such (you’ll probably read that again soon). If the season ended today, who would be your MVP? Good question, glad I asked it. Peyton Manning? C.J. Spiller? Andy Dalton? J.J. Watt? What about Coach of the Year? Bill O’Brien? Bruce Arians? Ah yes, that’s why they play a full 16 games in the National. Football. League.

Let’s find out who’s the man, shall we?

30.) Jacksonville Jaguars (0-2; 30) — According to ESPN’s made up QBR that puts a quantitive score on how well an NFL quarterback performs, Chad Henne got a 4.1 this week. Four-point-one. If you’re scoring at home. We are officially on Blake Bortles watch.

29.) St. Louis Rams (1-1; 32) — Get blasted at home to the Vikings and win on the road against the Bucs; I’m certainly not going to try and figure out this team just two weeks in, but anything’s possible at this point. I’m ready for anything. 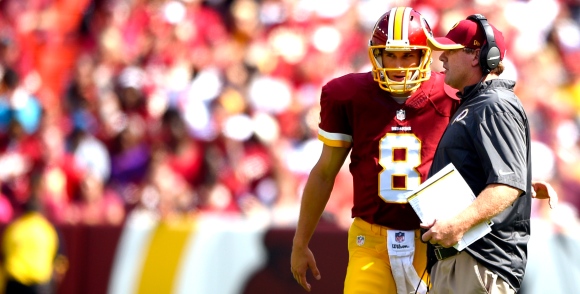 27.) Dallas Cowboys (1-1; 27) — It’s amazing what happens when the Cowboys stick to running the football and don’t let Tony Romo freelance behind the line of scrimmage to basically get himself beat to a pulp. What team shows up this week, however, is up in the air.

26.) Kansas City Chiefs (0-2; 24) — If Jamaal Charles is out for a considerable amount of time this team is in trouble, especially after its best defensive player tore his achilles.

25.) Tampa Bay Buccaneers (0-2; 23) — First you lose to Derek Anderson, then you lose to Austin Davis. Oh, and both games were at home. And you’re supposed to be a playoff team. Something ain’t right down in Tampa Bay.

24.) Cleveland Browns (1-1; 28) — Did anyone give the Browns any kind of chance to beat the Saints last weekend? Nope. Turns out these aren’t your brother’s Browns. Tough. Hard-nosed. Brian Hoyer has moxie. Johnny sure looked good those two snaps, right?

23.) Tennessee Titans (1-1; 16) — How do you go from lambasting a playoff team on the road to getting thrashed at home by an inept pretender? Jake Locker looked great and then horrid. Can’t figure out this Titans squad so far.

22.) Minnesota Vikings (1-1; 14) — Umm, yeah, I don’t know what’s going on there as much as you do but one thing is for certain after the Vikings drubbing at the hand of New England last week: Teddy Bridgewater’s time is coming. Soon.

21.) New York Jets (1-1; 19) — Only the Jets could lose because their offensive coordinator called a time out just a split second before their second-year quarterback who may or may not be any good throws the greatest pass of his short NFL career to a young receiver who makes a leaping grab in the end zone to tie the game but it didn’t count and they go on to lose because of it.

20.) Houston Texans (2-0; 20) — Houston has beat the Redskins and Raiders, so not exactly world beaters, but starting the year 2-0 is impressive and J.J. Watt is on a mission to take over the world. I’m afraid just typing his name.

19.) Baltimore Ravens (1-1; 22) — Disaster week in Baltimore last week and considering what was swirling around that football team, what they were able to do on a short week against a good Steelers team; impressive to say the least.

17.) Miami Dolphins (1-1; 9) — I was ready to be a believer in the Dolphins, I really was. But they got dominated by the Bills, even more so after Knowshon Moreno went out with an elbow injury.

16.) Detroit Lions (1-1; 12) — Everyone was saying, myself included, that the Lions needed to show us they could beat a tough team on the road before we would start taking them seriously; and we wait another week.

15.) Pittsburgh Steelers (1-1; 4) — It was pretty shocking this team let Cleveland get back in the game in Week 1 and then got completely outclassed last Thursday night against a Ravens team fighting controversy.

14.) Buffalo Bills (2-0; 25) — Buffalo has been the most surprisingly impressive team this far, defeating good teams on the road and at home, showing a knack for the big play and coming up with the defense when needed. Gotta see it consistently before I believe though.

13.) Chicago Bears (1-1; 21) — So the Bears, in eight quarters of football this season, have laid an absolute egg in six of them, and absolutely dominant in two. Lucky for them it’s the last two that’s been the most dominant.

12.) Arizona Cardinals (2-0; 18) — Narrowly edging the Chargers at home is sort of impressive, escaping against the Giants is not whatsoever. Not sure what to make of this team so far, but it’s nice that Larry Fitzgerald was targeted 500 times. Quiet his dad for a week.

11.) Indianapolis Colts (0-2; 6) — Why Chuck Pagano doesn’t just turn Andrew Luck loose is beyond me and probably most every Colts fan. But hey, at least Trent Richardson looked like a real life human functioning running back this week, right?

10.) New Orleans Saints (0-2; 7) — The Saints are a team with Super Bowl aspirations, and I know many out there picked them to be as such, but this stat is a very real one: only one team in the last 5 seasons has started the year 0-2 and made the playoffs.

9.) Philadelphia Eagles (2-0; 11) — The Eagles are the first team in NFL history to be trailing by 14-or-more points in their first two games and come back to win them both. Soooo maybe they should work on their starts, ya think?

8.) Green Bay Packers (1-1; 8) — How is it possible that Jordy Nelson doesn’t have the respect of defensive coordinators across the league just yet? All he goes out and does is dominate week-in and week-out. Great fortitude to bounce back after looking like a mess in falling behind 18 against the Jets.

7.) New England Patriots (1-1; 10) — Tom Brady is still pissed the offense isn’t clicking like it should but be honest, I wasn’t the only one panicking after the Vikings went up 7-0 Sunday very easily. What followed was the defensive performance we were all expecting from the Patriots.

6.) San Francisco 49ers (1-1; 3) — Talk about a tale of two halves in the opening game at Levi’s Stadium. Colin Kaepernick shows flashes of being one of the best players in the league, then he slips back down to looking like someone still struggling to pick it all up.

5.) San Diego Chargers (1-1; 15) — Boy, the Super Chargers sure showed the rest of the league something last Sunday, huh? Did they expose the Seahawks? I won’t go that far, but San Diego will be there come season’s end.

4.) Carolina Panthers (2-0; 17) — The Panthers win on the road in Week 1 without their starting quarterback and then do it again in Week 2 against one of the most explosive offenses in the NFL without their best defensive player.

3.) Seattle Seahawks (1-1; 1) — Seattle isn’t going undefeated and the big story is how all-world mouth team defensive back Richard Sherman got “exposed.” Well, he’s still wearing the ring so let’s all just calm down about that for a week or two.

2.) Cincinnati Bengals (2-0; 5) — The Bengals have been the most consistently balanced and impressive team in the league through the first two weeks. Let’s see it continue or maybe even in January.