LOS ANGELES — I have to write about Tony Romo this week. Wow, what a game he played last Sunday against Denver. He went toe-to-toe with Peyton Manning and nearly came out victorious. Nearly. That seems to be a word we use often to describe Romo and his play. He nearly puts it all together. He nearly comes away with big victories when his team needs them the most. He nearly is among the top QBs in the league. In the offseason, when Jerry Jones signed Romo to that outrageous $108M contract, Jones said he wanted his quarterback to be more like Manning. He meant this in terms of being a complete football guy. Putting in the extra hours in the film room, working out, running routes with his receivers. Romo even went out of his way bypass his annual attempt to qualify for the U.S. Open this summer. And look, it’s shown. Romo has been out of his mind this year. He’s second in TD passes (13), INTs (2) and passer rating (114.3), and third in completion percentage (71.8%) but yet the Cowboys are only 2-3. Why is this? Is it all on his shoulders? When you get paid nine figures it all goes on you whether it’s your fault or not. Team can’t run the football? Who cares, you’re getting $100M. Defense can’t get off the field? BFD. You’re getting paid $100M. The NFC East is primed for Dallas’ taking and it’s up to Romo to take it.

Let’s find out who’s The Man.

32.) Jacksonville Jaguars (record: 0-5) (last week: 32) — For a second, didn’t you think Jacksonville might pull off the upset against St. Louis? And Justin Blackmon, nice wheels.

30.) Tampa Bay Buccaneers (0-4) (31) — So now McGlennon (as Warren Sapp calls him) is the captaining the pirate ship. I’m guessing a lotta turnovers and handoffs to Doug Martin (my pick to win the rushing crown) this week against the Eagles.

29.) Pittsburgh Steelers (0-4) (29) — Who woulda thought that Ben Roethlisberger and Eli Manning, with four Super Bowl rings between them, wouldn’t have a win after five weeks. Sure as hell not me. And not you, either.

28.) Minnesota Vikings (1-3) (25) — Is it amusing to anyone else that three of the bottom five teams all had byes last week? Welcome to town, Josh Freeman! What week is Freeman the full-time starter? Seven? Eight?

27.) Carolina Panthers (1-3) (24) — Heard an interesting stat: Cam Newton’s top two career passing games are still his first two ever played back in 2011. You believe that?

26.) Buffalo Bills (2-3) (21) — Really feel for E.J. Manuel, but he’s fortunate his knee injury isn’t as serious as Brian Hoyer’s, who’s hit looked less severe in comparison. Can’t believe it’s gonna be Tuel Time for the next couple weeks. There is some bad NFL quarerbacking going on in a few of these cities.

25.) St. Louis Rams (2-3) (27) — If the Rams lost to the Jaguars there were going to be MAJOR problems. Now comes a winnable game against the floundering Texans. Five-hundred a real possibility and a new season. 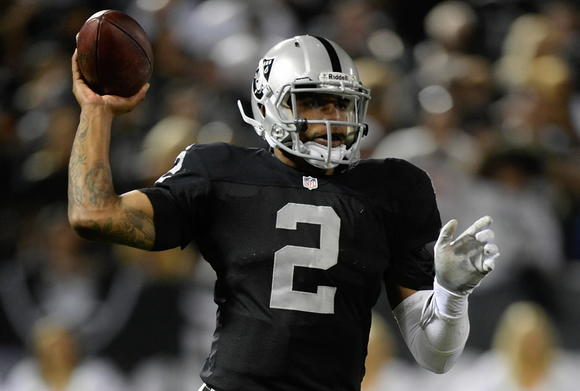 24.) Oakland Raiders (2-3) (28) — I’ve always said I wanted to like the Raiders. Not sure why, maybe it’s the simplistic badassery of their uniforms, or the “Just Win, Baby” attitude, but now I have a legitimate reason with the way Terrelle Pryor is playing. As Rich Eisen likes to say, he’s a factor.

23.) Washington Redskins (1-3) (26) — Another week’s rest for My Good Friend Robert can’t be a bad thing, nor is it bad for Alfred Morris’s banged-up ribs. But now they return to play on Sunday night against a Dallas team that’s feeling itself after hanging better than maybe anyone will this season against the  Broncos.

22.) Houston Texans (2-3) (14) — In our Saturday GameDay Morning meeting, the guys throw out Bold Predictions and see what sticks. Well, before Marshall Faulk settled on taking Terrelle Pryor topping the Chargers in rushing yards, he toyed with the idea of taking Matt Schaub to throw a Pick 6 for a fourth straight game. Seemed laughable at the time.

21.) Atlanta Falcons (1-4) (15) — The wheels are falling off the Falcons bus with Monday’s shocking loss to the Jets and then Tuesday’s news that Julio Jones is most likely lost for the season with a foot injury. Good thing I have Matt Ryan and Tony Gonzalez on my also 1-4 fantasy team. Oh wait.

20.) Philadelphia Eagles (2-3) (23) — The Eagles have been outscored by 24 points this season, haven’t won at home and yet are tied for the lead in the NFC East but have a big task with Mike vick on the shelf for at least this week. That’s how wide open the NFC is. It’s going to be a such a fun ride the second half of the season.

19.) Arizona Cardinals (3-2) (22) — Raise your hand if you thought the Arizona Cardinals were 3-2? My hand is not raised. I had to double check that. It seems like they’re winning in spite of Carson Palmer, who’s completed less than 60% of his passes, has a passer rating of 67.0 and has nine interceptions to only five touchdowns.

18.) Cleveland Browns (3-2) (19) — Really excited for Browns fans and the city of Cleveland. What an awesome ride the last three weeks have been. Really feel for Brian Hoyer though, who was enjoying his best go as a professional quarterback before tearing his ACL last Thursday. Highly doubt Brandon Weeden can keep it going.

17.) San Diego Chargers (2-3) (13) — If Tony Romo went Tony Romo on Sunday, then the Chargers went Chargers Sunday night against the Raiders. I mean, how classic was opening-drive interception followed by giving up a bomb for a TD?

16.) Tennessee Titans (3-2) (12) — The Amish Rifle had the Titans so close to knocking off the Chiefs but you just knew he was going to turn it over at a key moment, and lo and behold, he did.

15.) Baltimore Ravens (3-2) (18) — Impressive win last week, going down to Miami and taking care of business. Still, it’s a little concerning Ray Rice is still only averaging 2.9 yards per carry this season. Though fantasy owners have to be pleased by his two scores.

13.) Chicago Bears (3-2) (11) — This is the Jay Cutler Era for ya; win three straight, lose two. I’m expecting another 3-game run here followed by an injury and crushed playoff hopes.

12.) Detroit Lions (3-2) (10) — Well, I guess we see how important Calvin Johnson is to the Detriot Football Lions. Still think they’re better than the Bears, though.

11.) Miami Dolphins (3-2) (7) — There’s a lot of teams in the same boat this season. Hard to tell if that boat is sailing toward Playoff Island or not. Also, Brian Hartline was at NFL Network this week and I told him how my buddy Jason took 25 minutes to take him in the 8th round of my fantasy draft. Needless to say he was flabbergasted.

9.) Cincinnati Bengals (3-2) (16) — Yes, there was a monsoon right as Tom Brady was going to make this trademark comeback. Yes, the Patriots trotted out a JV corps of wide receivers. Yes, they only scored 13 points. But still, the Bengals gutted out that win and look like a playoff team.

8.) New England Patriots (4-1) (6) — At the end of the day, the Patriots are still 4-1 but six points is not going to cut it. The offense has to get better and if Rob Gronkowski comes back this week, it will. Just not sure it’s enough to take down the Saints.

7.) Green Bay Packers (2-2) (9) — Would’ve liked to have seen the Packers blow out the Calvin Johnson-less Lions but a win is a win is a win. If they can run the football a little better, Green Bay should contend in the action-packed NFC.

6.) Indianapolis Colts (4-1) (8) — Rich Eisen was on Dan Patrick Thursday morning talking Top 10 NFL quarterbacks and didn’t want to put Andrew Luck in there. I would have him in there. He’s damn good. And this is a damn good football team.

5.) San Francisco 49ers (3-2) (5) — Colin Kaepernick had just six completions and the 49ers routed Houston. Not sure if that says more about the state of the Texans or how potent this San Francisco offense is when clicking on all cylinders.

4.) Kansas City Chiefs (5-0) (4) — The Chiefs faced a little adversity on Sunday on the road, and when the going got tough made the plays needed to remain unbeaten. Of course, they were playing against the Amish Rifle, so yeah, maybe it wasn’t that impressive.

3.) Seattle Seahawks (4-1) (1) — If the Seahawks had pulled another comeback win on the road I would’ve been very shocked. As it were, they suffered their first loss and are no longer The Man.

2.) New Orleans Saints (5-0) (3) — The Saints have reached the point where there’s no chance I’m ever picking against them. Zero. They are in full-out Eff You Mode and I like it. Even though Sean Payton strikes me as that annoying frat guy who’s always gets hammered and runs his mouth about how rich his daddy is.

1.) Denver Broncos (5-0) (2) — We know how good Peyton Manning is, but the biggest question the remainder of the season will be can that defense get stops when needed. We’ll find out next week when Von MIller returns from suspension.